A Murder in Winter 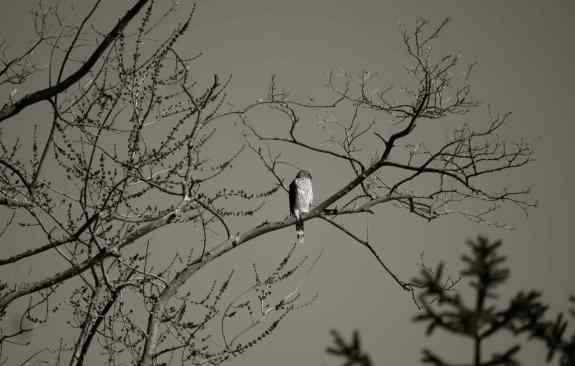 I’m going to start from the end. It’s a happy ending.

You don’t have to feel bad for me because this, the second time, I feel a little foolish. Or inept. Or just very, very lucky.

I can’t stop thinking about the crows.

When we let her out of the cage, the other ducks crowd around Gladys, quacking and clucking with what had to be joy. It’s a ducky sort of download that happens whenever one leaves and then comes back.

There are two little stitches on the side of her neck. They don’t seem to notice.

Notify the hospital if ANY of the following occur:

The doctor and I go into an examination room and discuss her findings. “It’s pretty deep,” she reports. “I want to stitch.” I quickly sign off. “Whatever you think.”

I’m still coming down from the post-rescue adrenaline.

We talk about the tenacity of raptors. And the sharpness of claws.

The hawks come for songbirds that scavenge the ducks’ food. If a predator gets lucky, it finds a bigger target, often in a water bowl. Definition: sitting duck.

It’s not that a Cooper’s hawk can lift or even knock out our hefty waterfowl, it’s just a question of time. Time enough to do damage.

When I return to the garage, I get a better look at Gladys. There’s a tiny spot of red on her throat.

And now I know which duck.

Even after the raptor gives up, the crows follow.

At first, I thought they were like squirrels and jays, a chorus of prey, harassing the hawk, warning the others.

I run hot water and plunge my feet under the faucet.

I calculate/analyze/consider: Puff’s bloody ordeal had a Grand Guignol kind of obvious. This time it’s not clear which duck s/he grabbed. Do they all go to the vet? (Yikes.) But claws and beaks cause hidden damage. Should I wait and see? Will that be too late?

We shuffle into the garage. I can’t feel the bottoms of my feet.  As the door chugs downward, I see one of the crows watching us.  I shout it off.

The ducks stagger toward the glass doors to the living room. They must remember this is where I let the wounded Puff retreat. With hawk gone and no visible blood, I decide to take them around the house. They’re wary but willing.

As I look back, I see the hawk sitting on a branch inside a pine tree. It sees me watching and lifts off. Note to self: The pine trees aren’t safe anymore.

The ducks beat me to the gate.

Two things about walking barefoot in the snow:

1) I don’t slide around as much as I thought I would.

I can’t figure out which duck is under the hawk. From the upstairs window, I can only see those terrible wings blocking and holding and the other birds completely freaked. I don’t wait to see more. Learning a lesson from last time, I stopped wearing socks in the house so I could move fast if necessary. This would be necessary. Only one problem: Winter.

I run to the nearest door, which opens on the snow-covered deck. I step out and scream and the hawk takes to the air. Which is good because I can’t move fast and, luckily, it doesn’t know that. I pick my way to the gate and onto the crunchy lawn and the ducks rush toward me. Gladys heads in the opposite direction, the crusted snow and her own ungainliness working against her.

I don’t see any blood.

Last week, I brought the ducks some lettuce and notice a few songbird feathers scattered on the snow. The hawk is back. After scanning sky and trees, I decide to move their bowls deeper under the pines.

It’s February and the cold lingers. At least, the water in the black rubber bowls won’t freeze if I put them in the sun near the pine trees.

Every day I carry two hoses to the yard that will reach the water bowls when combined. I wear special shoes fitted with spikes so I won’t slip on the intractable ice. I go back and forth attaching the hoses to each other and to the faucet on the set tub in the garage. I do this sometimes twice a day.

It’s been more than two months since the attack on Puff.

The blizzard that wasn’t a blizzard is followed by something worse: Ice. We get freezing rain on top of snow and then sleet and more snow. It’s packed so thickly we can’t remove it from the tarps on top of the pen. Those black tarps that were supposed to absorb the sun and melt the ice. What sun? Later that night, I watch a show on the Weather Channel about the dangers of heavy snow.

New plan: ducks in the garage overnight and under the pine trees during the day.

The robins return (early?) and sometimes we get starlings and crows. I love crows.

With all the packed snow, I can’t close the door to the pen anymore. The ducks could shelter there during the day but they prefer the pines and, frankly, it’s easier to keep the water ice-free over there.

I stop using the spigot on the outside wall.  I missed the icicles gathering on the gutters, like suburban swords of Damocles. Then, by chance, I happen to notice when one falls to the patio while I’m inside doing dishes.

(Almost) Headline: Woman Hurt By Falling Ice While Getting Water.

After the first real snow, it’s tricky getting the pen door fully open. I use my feet to clear a path.  Weren’t we pulling carrots a few weeks ago?

It’s too cold now to use the deck hose. I switch to the awkward frost-free spigot on the side of the house. This means lugging a 50-foot hose from the garage each time then taking it away afterward. Eventually, the steps get covered with snow then ice. I have to kneel on them anyway.

I’ve always been a fan of the Corvidae family: jays, ravens, magpies, crows. My daughter doesn’t like me to say “murder” of crows.

For weeks, the ducks have stayed in the new pen. Sometimes, squirrels try to get inside so I reinforce the fencing with hardware cloth and zip-ties. We have a new duck in the family and she’s wary of leaving the safety of the covered pen. The flock takes quick supervised trips but mostly seem content to stay inside their shelter.

Sometimes the ducks cock their heads and stare at the sky with one-eyed intensity. Sometimes I can see the hawk; sometimes I just hear it.

In early December, Puff survives a hawk attack. I decide to leave the ducks in the pen for the foreseeable future.

In November, we go away for Thanksgiving and leave the ducks with a sitter and their cozy new pen.

In October, we get a new duck pen. It’s big enough for five ducks and tall enough for me to stand in. There’s room for their old coop and the whole structure sits on a slope for easy drainage. The wire mesh roofing is strong but light, attached with zip-ties to sturdy metal poles. It’s perfect.

I don’t even think about winter.