In our distraction over Gladys and her travails, we have mostly overlooked her “sister” Welsh Harlequin, Peep, who is starting to feather out in a beautiful pattern of browns and golds.  Intriguingly, she is also developing a darker head, which makes her look handsome and grown-up and also, well, a little boyish.  (Gulp!)  I try not to dwell on the complications of inadvertently getting Donald instead of Daisy and head to my trusty laptop for some answers.

From what I could glean from a blizzard of Welshie images, not only are there two distinct kinds (Gold and Silver, called “phases” for some reason) apparently they change color dramatically over the first year and their final pattern can be quite different still.  In other words, there can be some, ah, ambiguity about gender for a while.*  Except for this: Only females quack.**  (Why does this suddenly sound like an old Alice Cooper song?!)

Oh, ok, quacking. That makes it easy, right?  Get your ducks to start quacking and figure out which of them are doing it and done deal.  The only questions are can I tell which one is doing the quacking, what exactly is quacking and when they’re actually quacking, why am I not in the room?  Let’s take these in order.

Gladys doesn’t quack yet.  Puff is the strong silent leader who delegates all her quacking.  The precocious Cayugas definitely quack (although each has a slightly different vocal style—go figure.)  Peep indeed does make a sound that sounds more and more like a quack but stops short of Disneyesque.

Getting them to quack on command:

This is like getting your cat to “talk” on video—good luck!  Since my girls(?) mostly quack to get me to do something, once I am in the room doing whatever they’ve commanded, they stop quacking.  So my neighbors get to hear me say (a lot), “which one of you just quacked?” Or “come on, quack for me!”  Or “can I get a quack quack?”  Total silence.  (And some of my neighbors no longer look me in the eye.)

So the takeaway from my web research is this—females make a louder more distinctive quack than males.  But since this is a definition based on a comparison, how can you tell which is louder without a male around?!

Guess we’ll just have to wait and catch them laying eggs. 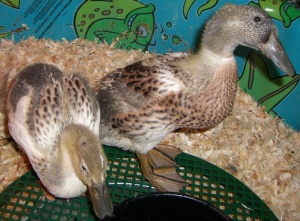 Gladys (on left) and Peep. Note the latter’s head coloration and reddish breast, another possible marker of maleness. Maybe.

*I suppose one could tip them over and take a look but that takes all the fun out of it.

**Evidently this is true of all ducks descended from the Mallard.