What I Would Do Differently Next Year (And Why)

We’re not even close to fall harvest but it’s not too early to start making excuses, I mean, start taking stock.  In the hopes of not repeating (too many) mistakes next season, I am publishing my errors so I can look them up on the Internet next year and maybe even correct them.  (Note to self: send reminder email in March.) 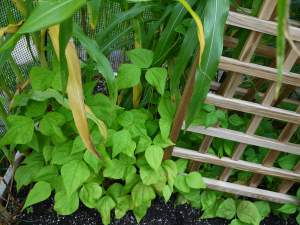 Happier beans, under the corn.

Plant the beans at least two weeks later than the corn. (When it gets hot, the corn needs to be big enough to shield the baby beans from the heat.)

Plant the corn and pumpkins earlier and the potatoes later.  (The long-season veggies would have been fine starting in late May, not mid-June.  Presuming, similar conditions next year, of course.  The potatoes which started in April are ready now but I don’t have the right storage conditions—September or October would have been better time for harvest.)

Cover the sunflowers sooner and take the cover off sooner rather than later.  (Varmints! Weeds!)

Protect the unripe tomatoes from the squirrels.  (Squirrels don’t give a duck about “vine-ripened” tomatoes—they want ‘em NOW!)

Plant vegetables that need pollination at the same time.  (If you cover something that needs to be protected in the same area that something else needs critters for pollination, you will not get fruit!) 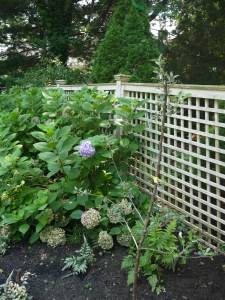 That stick is supposed to be an apple tree.

Move the apple trees to a less wet location.  And by “less wet” I mean less than the duck-friendly, bog-like bed that formed after we moved out Sleeping Beauty’s thorn patch and put in ferns and hosta.  (The broken sprinkler head might have had something to do with it.)  (And misjudging how leafy our neighbor’s gorgeous but overarching trees might get.)  Needless to say, no apples this year!* 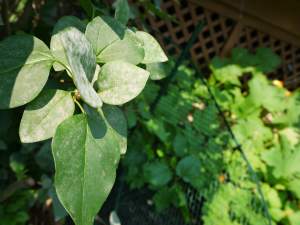 Rip out the powdery-mildew-prone lilac bush and plant something else next to the pumpkin patch.  (Because there’s nothing sadder than a pumpkin patch without pumpkins.)

Give the potatoes vines some support.  (Had no idea they would grow quite that big and sprawl quite that much.) 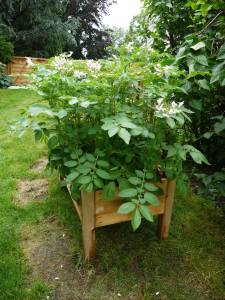 Assume the ducks will eat any sprouting vegetable plant they can reach.  (Fence the babies early but leave access for weeding.  Tricky if you’re also protecting them from other so-called wild animals.** Will require a skillful mix of attention, wiles and raptoresque vision—not to mention prodigious amounts of bird netting and poultry fencing.)

Realize that ducks can jump. (Okay, we’re not talking NBA-ready but high enough that a slightly raised platform is not sufficient height to deter a hungry bird.)***

Consider fencing the deck from the ducks.  (But they’re soooooo cute!  Don’t you just love it when they come to door begging for dinner and/or company?  But you have to clean up after each visit and your water bill is already going to be astronomical this summer so doesn’t a simple fence and gate make more sense???  But they’re soooooocute!!!!)

Can we get them to use a dinner bell instead?

**My mother thinks our well-behaved ducks are gentrified but has she met the ridiculously confident rabbits and feckless squirrels?

***For more amusing and sage advice on ducks and gardens, see Carole Deppe, “The Resilient Gardener: Food Products and Self-Reliance in Uncertain Times”, 2010.