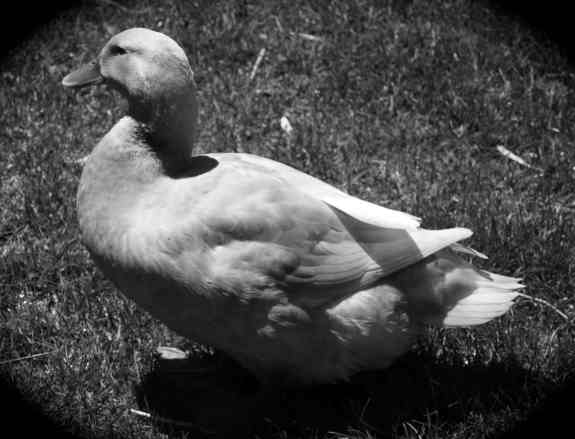 Without getting into larger social-political, spiritual, historical, sporting, educational or scientific issues, let me just say what I’ve been saying for a while—sometimes it’s hard to know whether or not you have a duck.

No, no, I don’t mean, “Sweetheart, you know that critter we’ve been feeding and housing for twelve months that I thought was a poodle?”  No, not that.  I mean that first you think your waterfowl is a duck.  Then you think your duck is a drake.  Then you plunk down a chunka change for definitive proof and cool your heels a couple weeks until the results come back and then wait some more time to get it together to write up the blog post.  (Hey, on TV it goes much faster.  Hey, on TV nobody has a real life!)  Well, the results are in and, since DNA tests don’t lie* now you know (drum roll) about as well as you’ll ever know that: (trumpet blare) Puff is a duck after all.  (Cymbal crash!)

In case you’ve missed some of the plot points, let’s just say there’s been a little uncertainty over whether or not we got a few unintended males in our original poultry order.  A bit of bird gender confusion, as it were.  I mean, the birds weren’t confused, it’s we who were confused, about certain traits, that is to say, we imposed said gender based on observation of assumed male characteristics and…oh nevahmind!!!   We thought we had one or two drakes in the snack-pack instead of a five-duck starter set.

For more on this kerfluffle, you can check out the earlier posts but to sum it up, we goofed.  Again.  We called Puff a girl for the first 5 months, then a boy for the next 5 and now we call her Hey You.  It’s easier.

At the vet, they assured us that ornithological gender uncertainty is all-too-common, even with medical professionals.**  Someone also told me about an owner who swore up and down that their pet bird couldn’t possibly be a girl until for some reason, many years down the road, they did a blood test and whaddya know?  Had to go buy a pink cage for Spike after all.

So, if x-rays, physical examination, egglessness while boarding, coloration and behavior won’t do it, you have no choice but to slap down yet more cash for cutting edge science to tell the tale, right?  Um, maybe.  Okay, well, apparently there is one more way.

As I stood in the lobby waiting for the paperwork to clear, a nice young man in contempo attire listened to the veterinary staff and me as we debated boy vs. girl.  Now this guy looked neither like a farmer nor a 4H-type nor even a backyard birder.  In other words, he was the last person I expected to weigh in on duck gender.  But he did.  To figure out whether a[n] [adult] duck is a male, he suggested,  just look at the tail.  If it’s curly, it’s a boy.  (Apparently, all ducks descended from the mallard share this trait.)***

What???!!!  That’s it?  No pricey tests or exams or chasing them around with time-elapse cameras to see if they lay eggs?

To tell the tail, as it turns out, all you have to do is look at it.

*Nope, not going there!
**Dangling modifiers, bane of my existence.
***Says so right on page 247 of my trusty duck reference, Storey’s Guide to Raising Ducks.  Perhaps I was too tuckered out by duck parenthood to get to that section?