One Potato, Two Potato, No Potato?

“Good thing you don’t have to live off what you’re growing!” my mom chirruped when I called to lament my wizened cukes and ripe-resistant tomatoes.*  Right, good thing.  I mean, no not good!  It’s true we hadn’t exactly planned to subsist entirely on rosemary, basil and ornamental corn but what the ducks, you gotta start somewhere!

Even the guy I buy my fowl feed from shrugged when I complained about my veggies’ surrender to heat and humidity.  At least, you don’t have to live off them, he basically said*.  Sure,  but I thought I could get, like, a complete meal or two. I’m not a total novice!  Look at my sunflowers!***

Okay, so in order to get a complete meal, my clearer head said, you have to plant a complete meal.  Herbs and carrots do not a complete meal make.  (A tasty side dish, maybe.)  In the depths of our admittedly mild winter, when I poured over catalogs and fantasized over glossy possibilities, I had it all figured out.  On paper.  In the reality of Reality, weather, climate and the rest of my life intervened.  (Oh, and the ducks.)  This further strained my already meager ability to plant at optimal times, thin for improved yields and as for weeding?  Well…

Despite all the challenges, I do have one plant story that, even with a few setbacks, culminated in a delicious (and buttery!) ending.  Yes, that’s right, the potatoes.  I know that this lowly, even despised starchy vegetable is abhorred more in the preparation than in the spud but still.  Potatoes are really a wonderful food.  And even though it’s not a rock star sort of veggie (what would be? eggplant? arugula?) its utter hominess is a large part of its charm.

Did I mention they’re not that hard to grow?

But, first, the setbacks.  We had a soggy spring.  Great for the lawn, dicey for the spuds.  I started really early.  In fact, I planted the first seed potatoes the day we got the ducklings.  That was mid-April.  (As I said, mild winter.)  For weeks and weeks it seemed to stay kind of coldish and moistish and I distinctly remember waking up to another roof-tickling rain and thinking, there go the potatoes.  And then, suddenly, bingo.  Up come the vine tendrils.  And they kept coming.  Bigger and bigger, we hilled them as directed and waited for the flowers.  Ours grew in Smart Bags seated in planters to keep them off the ground and away from foraging ducks (who weren’t even outside yet but would be soon enough.) 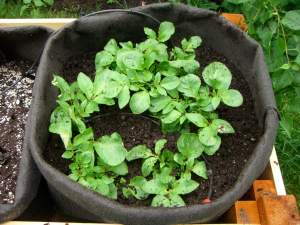 I planted a second crop a week or two after the first (I forgot that I had them, actually, it was a crazy time) but they dutifully rooted and bloomed along with the first.  Sometime come late June, early July, the vines started to look a little peaked and I began to wonder when I should harvest.  After a bit of on-line research, I decided that I really should dig around (gently) and see if I could find any erstwhile taters.  I kept putting it off and putting it off.  Then Mom showed up. 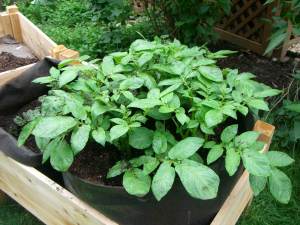 End of May, going strong.

As it turned out, she had also ordered seed potatoes from the same company, Wood Prairie Farm in Bridgewater, ME, (she copied me!!!) and had started them weeks after I had.  Hers weren’t ready yet but based on the vine die-back, we decided mutually that there really didn’t seem to be any reason for me to put off digging.   So with my mom as Motivator-in-Chief, I stuck my hand in the dark loam and dug. 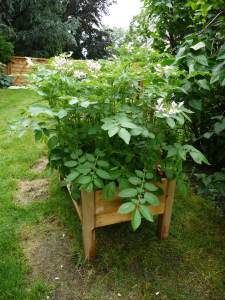 Mid-June, at the height of their blooming.

Gingerly, I noodled around further but, alas, no more potato joy.  I decided to quit while I was somewhat ahead and leave it for another day.

Later that night, however, Mom said casually that she expected about “fifty pounds” of potatoes from her container and so, evidence to the contrary, I brazenly began to prepare for at least twice that (I had two containers, right?)  Concerned that I lacked sufficient storage space for 100 pounds of potatoes, I called Maine again and asked whether or not they recommended leaving the ripened potatoes in the Smart Bags.  They did not.  Considering it was only July and I didn’t expect my normal storage area (the garage, no A/C, of course) to drop the necessary 50 degrees any time soon, I cleared out some space in the pantry and called the company once more, this time to order storage bags.  (Refrigeration is not recommended as it changes the consistency of the vegetable.)

When the bags arrived (gigantic ones, mind you) I screwed up my courage to the sticking point and prepared to get some dirt under my fingernails.  Many of the on-line experts recommend dumping your whole container onto a tarp or similar material and picking out the potatoes that way.  Great advice but not when you’re dealing with an enormous pound bag of well-watered soil and probable vegetables that’s plopped inside of another container about two feet off the ground.

Yesterday I called the nice folks at the potato farm (yet again) and recounted my sad tale.  Was it just me (probably) or should I have expected to get more yield from five pieces of seed potato per bag?  (The potatoes, especially the Buttes, I hasten to point out, were absolutely delicious.  I mashed up one for Pamela the first day and could not get over the flavor excitement—this from a lowly potato!)

According to what I learned from Wood Prairie, my mother’s estimates were wildly optimistic.  (Ha!)  There were, shall we say, urban legends about people who planted in some ad hoc container and reaped 100 pounds of starch sustenance but this was a highly unlikely outcome.  Under normal, well-watered conditions, the rule of spud is for every pound of seed you plant, you can expect ten pounds of potato.  Since I planted the maximum for each bag—a whopping eight ounces of seed!—my five pound yield was, in fact, completely respectable.

Hmmn, wonder how many pounds my mother got?

Bay leaf and garlic suggested by Joy of Cooking (1975 version)

Ricer recommended by my mother-in-law and, by golly, she’s right!

1 decent-size russet or other all-purpose potato

Best butter you can get

Half & half or, if you prefer, milk

Peel and slice potato and place in small pot.  Just cover with water.  Add minced garlic, bay leaf, a bit of salt and pepper.  Bring to gentle boil and cook for about 15 minutes or until potato is done but not too too soft.  Drain water and remove bay leaf.  Rice potato directly into the serving bowl (or use hand-mixer or just mash with a fork.)  Slice an agreeable amount of butter onto the piping hot potato and mix it in.  Add enough of the dairy product of your choice to make as creamy as you like.  Salt and pepper to taste.   Serve immediately to hungry child (or yourself!)

*We have since greeted the arrival of a few ripened fruits.  Not holding my breath (or the pasta sauce.)